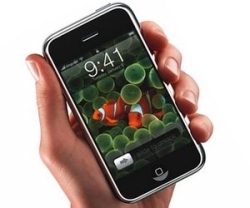 Well the iDay came and went, now that we’re 2 weeks after the launch of the most over-hyped, over-mediatized

phone ever, how did it fare? Well it did sell a lot, more than 500,000 just in the first weekend. Reviews came in from every possible source, and it was pretty much exactly as we had expected.

As I thought, many of the negative points got mentioned in the reviews, like the lack of a real keyboard, the price, the non-removable battery, the 2-years contract needed, and the lack of any third party software support. Some new things got found out, like the fact that if you have bad credit, AT&T will actually offer a pre-paid plan. Overall most reviews were positive, and since then people have been actively working on hacking it to enable even more features.

In the end it pleased a lot of phone users, but it’s of little interest to me, other than for the impact it will make on longer term phone development. Apple always has an effect on the industry, by proving that something can be made sleeker, easier to use, so we’re sure to see many more copies in the months to come, and user interfaces for phones in general should take a hint from the iPhone.

As this will probably be the last post on the subject, the reviews all over the web covered every possible feature of this device except one, so I have to ask the ultimate question to end this post: Will it blend?